How To Watch BFM TV Live Stream Outside France in 2022

BFM TV is another channel which uses geo-restriction capabilities to restrict access for people who live outside France. But no worries! Here's how to watch BFM TV outside of France using Ivacy VPN. 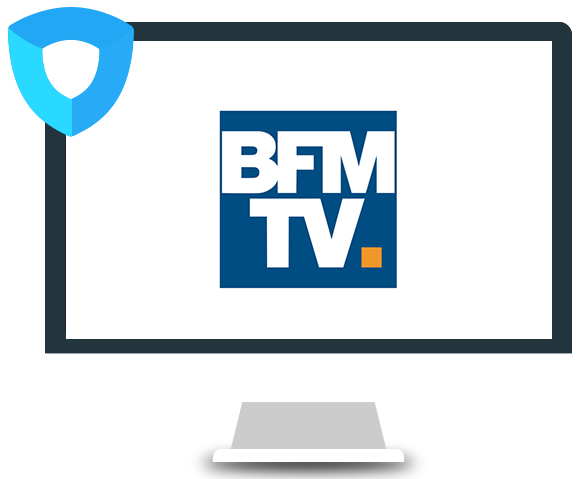 With Ivacy, unblocking BFM TV Live stream is a piece of cake. All you have to do is follow the three steps given below and you can catch up with everything that is happening back home with the channel that you love the most.

Watch BFM TV Live from anywhere in the world.

The French love their news and they like to take it from a reliable source at all times. BFM Live TV is the most-watched news channel in this European territory. The channel mainly focuses on news and weather updates and yet despite this, it has been able to garner such an amazing viewer base.

BFM TV or Business FM Television first began as a radio station back in 2004. It was launched by the NextRadio TV Group which owned other media outlets too. The channel has quickly grown to become one of the most-watched channels in the country. It has more than double the market share of its closest competitors and had a budget of €50 million back in 2011.

Although the latest figures are still not available, there are all indications to show that the numbers have gone anywhere but up. The channel was initiated to focus on business and economics. While it has stuck to the roots, the broadcast covers every aspect of the news and the weather too. Since 2005, a lot has changed for the channel and the appreciation from its audiences has made it a household name.

BFM streaming has two other channels that focus on other aspects. One of these is BFM Sport live. It is the second all-sports channel which was launched in France. The channel began transmissions in 2016 when the only other exclusive sports channel was Infosport+. BFM Sports streaming airs an 8-minute update every 30 minutes along with 3 magazines.

The second spin-off is BFM Paris. The channel takes its inspiration from News 12 which is an American broadcaster of news. In a similar fashion, BFM Paris also provides updates on regional happenings, news, weather, traffic and anything else which the audiences might find relevant. It was also launched in 2016 and was the first French local news channel.

BFM live streaming has an amazing experience for viewers because of the impressive roster of journalists that it has. They all serve different areas of expertise providing insights and analysis of all the hottest news items of the day. The total portfolio of the channel consists of more than 250 journalists and 50 of these are the ones working on-screen.

Business news is handled by Nicolas Doze, culture is done by Candice Mahout, technology by Anthony Morel, sports by Virginie Phulpin and weather by Christophe Person, Daniela Prepeluic and Loic Rivieres among many others. The list of journalists looking after daily news is enormous and includes quite a few names which have become a household personality in France.

BFM TV live stream has risen to the point where it is today due to some reasons. The biggest among these is that they experimented with a different type of news broadcasting which worked. The channel provides “a reactive, live format” for individuals to come and express their views. It breaks the stereotype and old habit which French people had of listening to long and boring pre-recorded debates.

This has been the driving force behind their rise to be the most-watched channel in all of France. Traditionally, news reporting in France was always coming from the perspective of private organizations but BFM Tv made it pro-business and pro-reform. All these little factors take together to make a significant difference in the viewership numbers of the channel making it the most famous one in France.

Is a VPN effective in unblocking BFM TV content?

BFM TV like many other regional channels is only available for viewership inside France. As soon as the border of the country comes to an end, the transmission stops too. So naturally, for those who are addicted to the channel, there is a solution in the form of a VPN. Virtual Private Networks or VPN can help reroute the original IP address location while masking it causing access requests to slip past any geo-restrictions quite easily. So, the answer to this question is yes, VPN’s are effective in unblocking BFM TV content outside of France.

If you want to watch BFM TV while you are outside the country, a safe and reliable VPN can help you do just that. With the ease of being installed as a result of a few simple steps, Ivacy VPN offers some great benefits like affordable packages and a lot more besides.