TV5 is a leading television in France, but this platform is not available outside the country due to geo-restrictions. Fortunately, you or anyone outside France can access TV5 with ease by using a reliable VPN, like Ivacy. 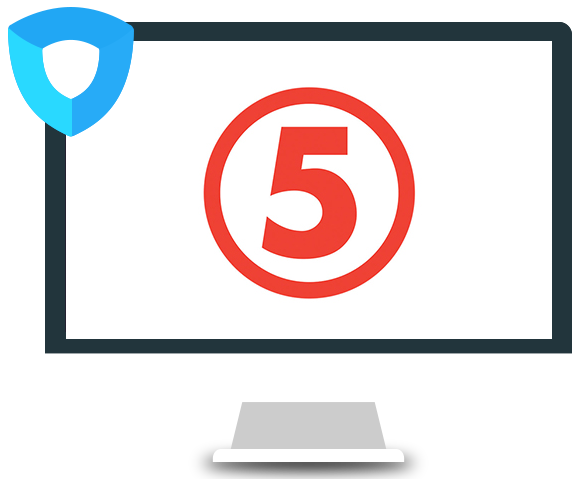 How To Watch TV5 Live Streaming Outside France

Ivacy has over a thousand servers in 100+ locations allowing effective connectivity for viewers to access their favorite channels like TV5 live streaming. With Ivacy VPN, you can evade licensing or geo-restrictions in just three easy steps.

Open the Ivacy app and connect to France server.

Watch TV5 Live Streaming from anywhere in the world.

TV5 is a leading television in France, but this platform is not available outside the country due to geo-restrictions. Fortunately, you or anyone outside France can access TV5 with ease by using a reliable VPN, like Ivacy VPN. Once accessed, you will be able to stream TV5 content to your heart’s content since it is free in France.

Established in 1984, TV5 Monde live became one of the most famous and widely distributed French-language television channels in the world. Five of France’s biggest channels had come together back in the day to form TV5 and thus its name. It was among the first four television channels which were carried by French cable television. Today, it is available through every major broadcaster in the world.

TV5 began as a news channel but quickly expanded to include a variety of other content too. Now, the channel has coverage 24/7 around the world. There are 18 newscasts every day at hourly intervals. Besides this, there are movies and television series, documentaries, cultural shows, and coverage of major sporting events from around the world.

The shows that air on TV5 are mostly taken from other French channels, especially those of the countries from the signals of this channel. The channel broadcasts political discussions like Aplikante sa Senado, which is a show featuring Senate candidates taking part in the recent election. The Aksyon TV5 live streaming is another roundup show for all the important news of the day.

The channel also has rights to broadcast some major sporting events from around the globe. They recently aired the FIFA ’19 Women’s World Cup. The channel also shows other tournaments like Ligue 1, the international matches of France Six Nations, as well as Coupe de France. Altogether, there is a diverse mix of content that viewers have access to with TV5.

The channel reaches 318 million households in over 200 countries. Around 32 million people tune in weekly to enjoy some of the content which is available on the channel. In the US alone, TV5 Monde live has an average of 1.5 million viewers. The transmissions are paid, and the costs vary according to the policies of the local cable service provider.

When visiting the TV5 website from outside of France, an error notice informs you that the content is not viewable in your territory. This blocking occurs as a result of your ISP assigning you a unique IP address, which allows TV5 to track your original location and prohibits you from seeing its programming if it discovers you are not in France.

There are a few options for watching TV5 online, but the most convenient and suggested one is to use a VPN. You don’t have to worry about being monitored because VPN keeps your data private. We’ll guide you on how to stream TV5 in this article.

You can watch TV5 in Telugu using YuppTV. But unfortunately, YuppTV is not available if you are outside India. In such a scenario, VPN is your ultimate partner in aiding you. Choose a VPN that gives you high speed without compromising your privacy. And most importantly, you would need a VPN that provides an Indian server. Therefore, we recommend using the Ivacy VPN. Follow the step by step process on how you can stream TV5 Telugu:

Ivacy VPN will allow you to surf anonymously, regardless of whether you want to get around geoblocking or just bypass limitations set on your work or school networks.

When you use Ivacy VPN, all of your internet traffic is directed through a remote server. Your original IP address is concealed throughout this procedure, but the IP address of the server you’re connecting to is visible.

This means that anybody spying on you over the internet sees you as the server you’re connecting to, making your connection private and anonymous. This not only adds security but also assures that you can visit the website whenever you want, even if it is blocked.

How to Get TV5 on Android?

The chances of not being able to stream TV5 on your android device if you are living outside of France is pretty high. If you are in such a situation and you want a way to access TV5 live streaming, then you can do so by following these simple steps:

The first step is to download a VPN from the Google Play Store. Because Ivacy VPN has French servers, we recommend using it.

Since TV5 is limited to certain countries other than France. There is a high probability that you don’t have access to TV5 if you are residing outside of France. The recommended way is to download a VPN to enjoy TV5 live streaming if it is blocked in your country. Let us guide you through a step by step process on how you watch TV5 monde live on your IOS device:

TV5 Monde has garnered a huge following not only inside France but around the world too. The channel claims to be the third most widely distributed channel across the world. Although the transmission is available in more than 200 countries worldwide, accessing it without a VPN can be dangerous. In order to mitigate any risk of your online privacy being compromised, it is crucial that users log in to a service like Ivacy and enjoy safe content from their favorite channel.

How do I receive TV5 Telugu live streaming?

Not sure how you can catch the TV5 live stream in Telugu?

Here’s a short answer; you can watch TV5 Telugu live streaming from anywhere in the world by subscribing to YuppTV.

Once you’ve done that, you should be able to watch TV5 Telugu live streaming from anywhere in the world.

Where Can You Watch TV5 In The World?

TV5 Monde Live is being transmitted around the world through ten feeds, all of which are specific to certain regions. This includes the following:

What is TV5MONDE +, and how does it differ from the standard TV5MONDE?

The free French-language video on demand platform TV5MONDEplus. Charge the reader… A wide range of films, series, documentaries, children’s television, periodicals, and other media are available, reflecting the richness and inventiveness of Francophone culture across the world.

A VPN is designed to mask the IP address of users so that the websites they are viewing can’t tell their exact location. This is in light of the growing concerns about cybercrime. While using a VPN, many people ask whether a channel can detect the service or not. The answer to this question is a little technical.

When using a VPN, people who are connected through the same server have identical IP addresses. This, a website server can tell obviously so they can detect that some kind of program is being used, but it is completely ignored. This is because the website assumes that the same person is accessing their content again and again.

What is the TV5 channel on?

TV5 and AksyonTV are now conducting digital test broadcasts on channels 42 and 51, respectively, which are controlled by TV5 affiliates Nation Broadcasting Corporation and Mediascape.

Is TV5MONDE available in high definition?

TV5MONDE Europe is currently accessible in high definition (HD) on some providers, and the company is working to increase its HD signal distribution to more providers. While other Maghreb-Orientan pay-TV providers are still experiencing capacity issues, TV5 continues to extend its HD signal availability. HD channels require five times the bandwidth of SD channels, and depending on bandwidth availability, it is up to the local Pay-TV provider to decide whether or not to stream in HD.

Why is TV5 no longer on Sky?

Why has TV5 been taken off my Sky box? Now there are no French-language channels. It’s typically the choice of a channel to withdraw from the Sky platform, usually because remaining is not financially viable or for regulatory reasons.

Does TV5 have subtitles?

TV5 has subtitles in English, Russian, Spanish, German, and Dutch. But sometimes, the subtitles are not available due to copyright issues.

How do I receive TV5 PH live streaming?

Live in the Philippines and have been looking forward to TV5 PH live streaming? We get you! TV5 is one of the best French channels to watch and has been harder to catch for fans who live outside France.

To ensure that fans in the Philippines can watch TV5 PH live streaming, TV5 has a dedicated website that you can try to gain access to. If that doesn’t work, an Ivacy subscription will help you connect to TV5 from a French server to provide easy access.

What about French programs for children?

Want your kids to learn French or at least stay in touch with the language? Getting them to TV5 live streaming is a great idea! TV5 Monde actually airs shows and programs for kids every Saturday and Sunday so that school and homework are not the only ways to learn.

The timings for kids’ shows are from 9 am to 10 am GMT. The channel offers a wide variety of shows for kids, ranging from old-time classics, including Il était une fois la vie and Calimero, to more modern shows like Valerian and even Les pyjamasques.

The shows for kids are guaranteed to not include any kind of violence and are completely ad-free. Cool, right?