Whatsapp remains blocked in certain countries due to unfair government censorship. But you can use Ivacy VPN to unblock WhatsApp and connect with your friends, family and relatives from anywhere around the world. 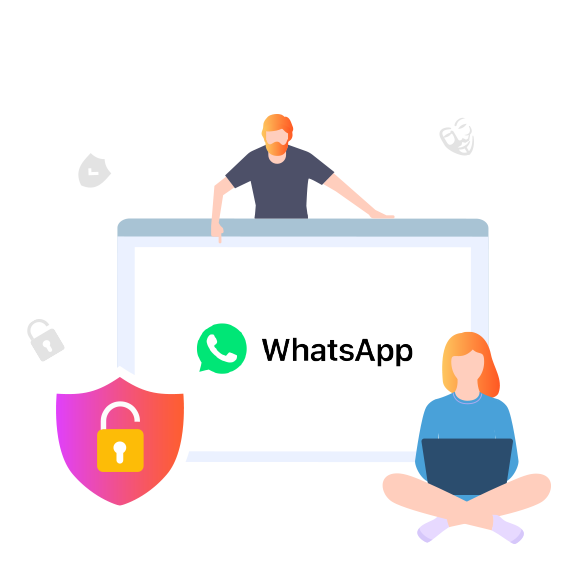 How to Unblock WhatsApp easily?

You can access WhatsApp with the help of Ivacy in just three easy steps. Ivacy VPN’s apps ensure that VoIP feature of WhatsApp works seamlessly on your devices – smartphone, tablet, and laptop no matter where you are.

WhatsApp is arguably one of the most used messaging and Voice over IP (VoIP) apps in the world. Considering its user base of around 2 billion people, it has become so widespread that it is hard to imagine connectivity without it.

WhatsApp can be used for staying in touch with family members, business communication, work collaborations and much more. Needless to stay, WhatsApp is an essential tool in the modern digital age.

However, governments have a problem with the fact that their citizens have the ability to contact each other for free in a relatively secure way that cannot be tracked. This is why many governments around the world have either fully or partially blocked WhatsApp.

With Ivacy VPN you can bypass such restrictions and easily unblock WhatsApp.

Countries where WhatsApp has been completely banned:

WhatsApp: How does it work?

We rely on some kind of app or mobile service on a daily basis to get in contact with our acquaintances. WhatsApp is just one of many of these apps that makes it easier to chat, send voice messages, share statuses, send pictures and videos for free.

WhatsApp uses VoIP (Voice-over-IP) technology, which enables users to use the internet as a medium for voice calls. This is not only convenient but incredibly cost-effective since you can make long-distance phone calls with it for free.

Using a VPN to unblock WhatsApp is an absolutely secure and a simple process. You don’t need to have the technical know-how to set up an Ivacy account. All you need to do is, download the app and connect to a server location where WhatsApp is available.

The Easy, secure and quick way to unblock WhatsApp on school Wi-Fi and at Work:

Ivacy VPN offers the easiest, most secure and quickest way to connect to the Internet and unblock WhatsApp. Ivacy is engineered to ensure that users enjoy the security of a state-of-the-art VPN solution without compromising on their speeds.

Your data remains protected from snooping individuals and you are also protected from compromised Wi-Fi networks with Ivacy. Also, you become invisible to the administrators blocking you from enjoying your WhatsApp conversations or calls.

How secure is WhatsApp?

With Ivacy’s encryption, anyone intercepting your data whether it is your Internet Service Provider – ISP or some hacker, they can no longer access your private data. WhatsApp’s encryption is one of the main reasons why it has been blocked by many governments because they can no longer spy on their citizens.

Why is WhatsApp being blocked?

Sadly, the authorities get nervous at the sight of their citizens enjoying too much privacy which is why countries with authoritative regimes such as China block WhatsApp as part of extensive censorship efforts aimed at curbing free speech on social media services including Facebook, YouTube, Gmail, Viber and many others.

Then there are countries where WhatsApp can be used to send and receive text messages. Still, the voice calling feature has been blocked to protect the local telecom businesses. However, with Ivacy VPN you can connect with a server located outside your country with a simple tap and regain complete WhatsApp functionality.

How is WhatsApp blocked by governments?

When a government wants to block WhatsApp, all they need to do is send written orders to the country’s ISP, which then prevents the users from accessing the service by redirecting any traffic from the users trying to access the service to a notification that tells them, the service is blocked.

How can Ivacy VPN unblock WhatsApp for you?

Ivacy works on any device on which you want to access WhatsApp. Ivacy VPN app encrypts all of the data being sent by your device and forwards this data to a server located somewhere WhatsApp isn’t blocked. Ivacy’s 256 – bit encryption ensures that your ISP is unable to see the websites to which the data is being transferred.

This process allows you to beat any censorship as your traffic is being rerouted allowing you to use the service freely. Moreover, Ivacy also provides you better online security by keeping you safe from hackers when you are using public Wi-Fi networks.

If you have connected to Ivacy but still can’t unblock WhatsApp, this is an indication that your ISP has blocked IP addresses of the known VPN providers upon the government’s request. If this is true, you won’t be able to access anything online apart from WhatsApp.

All you need to do in such a situation is, contact Ivacy’s customer support and inquire as to which servers can be used to unblock WhatsApp. IP blacklisting and the addition of new IP addresses is a continuous process which VPNs undergo, which is why it’s not a big deal and you need not worry.

Despite the fact that there are many great alternatives that can be used in place of WhatsApp, nothing beats the ease of use and encryption offered by WhatsApp. Therefore, you need a strong and reliable VPN service such as Ivacy to make the most of WhatsApp.