X
We use cookies to give you the best user experience. I agree Find out more
Home
Netflix VPN
Here is everything you need to know about watching American Netflix on Android in 2022 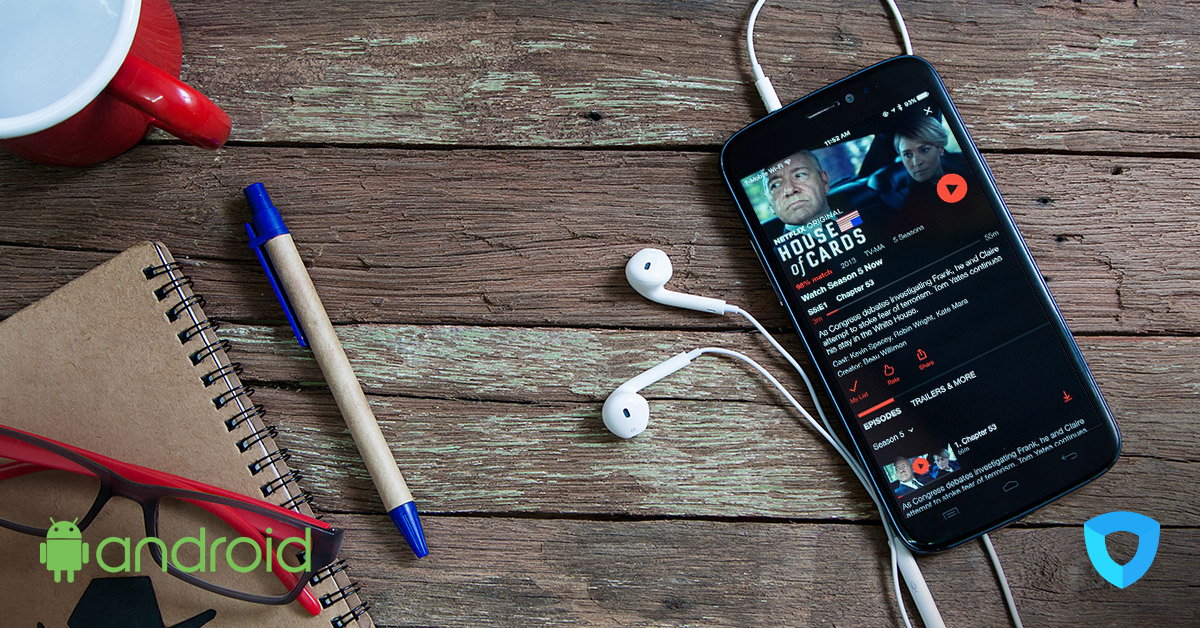 A pressing question in the online community these days is:

How to watch American Netflix on Android TV Box in 2022

A lot of people think that VPNs or Virtual Private Networks can no longer grant them access to geo-restricted Netflix content, but that’s not entirely true! There are still a select few VPN services that can aptly do the job and get you that kind of access.

Keep on reading to see how Netflix USA can be accessed on Android TV with the help of a VPN!

Before proceeding further, a little background into the cat and mouse game between Netflix and VPNs:

In 2016, Netflix initiated a sort of crackdown on VPN services by blocking access requests from them and proxies. It was thought to be difficult, but Netflix did succeed in blocking out the VPNs, because of which accessing Netflix with a VPN has become notoriously difficult!

“Whoops, something went wrong…You seem to be using an unblocker or proxy. Please turn off any of these services and try again.”

However, this doesn’t mean that you can’t watch the American version of Netflix on the Android TV box. Several Netflix Android VPNs still offer reliable Netflix unblocking, constantly battling the Netflix ban themselves!

The best VPN for unblocking Netflix remains to be Ivacy owing to its fastest speeds and reliability when it comes to working seamlessly with Netflix.

How to Evaluate the Best VPN to watch American Netflix on Android TV?

The very first step that goes towards watching American Netflix on Android TV from a country other than the US is the selection of a reliable VPN.

However, the cutthroat competition among VPNs to capture the market has made it increasingly difficult for the average user to figure out which VPN is the one offering the fastest speeds or the best security? However, to make things easier we have compiled a list of criteria against which you can evaluate your VPN choices, and thus ensure that you get the optimum connection for watching American Netflix on the Android TV from outside of the USA.

A VPN that is unable to support the Android TV cannot prove to be of much use. You are going to have a much better VPN experience if the VPN service you choose has an app customized for Android TV.

Ideally, a good VPN will have speed as its highest priority, and you will be able to stream with good download speeds without costing you your privacy or security!

The higher number of servers a VPN has, the larger its server network is and thus you have an entire range of fast connections and new locations to choose from, enabling you to select the best-performing ones.

It is particularly important for a VPN service to have a zero logs policy. If the VPN is actively logging your activities, you could run into trouble in the long run for accessing copyrighted content, and you don’t want that!!

However, regardless of which VPN you chose for unblocking Netflix, you should know basics such as:

How To Install A VPN On Android Tv Box?

Now that you have come to know the background behind Netflix and its ban and the VPNs let’s discuss how you can install and set up your VPN on an Android TV box.

There are two ways to install a VPN on an Android TV box:

Now that the app has been set up, you can follow these steps to make the VPN unlock Netflix library:

Now, is that not simple?

Do not give up on your VPN just yet in case a server doesn’t seem to work. If you have chosen Ivacy, there will be more than one US server available. So, test the other ones until you have solved your problem. Since Netflix is actively working 24/7 to hinder all VPNs from accessing its service, it means that a server working today may not be working anymore in the coming day. You have got to be patient!

It can be done through the following steps:

You can now download any app you wish to, with the help of the VPN!

Sideloading a VPN on Android TV:

In case you are running into trouble, installing the VPN from the PlayStore, you have the option of sideloading it. Sideloading refers to the process of transferring media files from a USB, Bluetooth or any other external media file.

You can sideload the VPN by following these steps:

This way you can successfully sideload your desired VPN on your Android TV.

How to watch American Netflix on Android Phone?

Getting access to the American version of Netflix is quite easy and can be done within minutes from anywhere in the world through an android VPN!

Here is the step by step instructions for getting access to American Netflix through an Android phone:

Hopefully, this will let you watch American Netflix on Android Phone!

How to Watch American Netflix on Android Tablet?

Here is the step by step instructions for getting access to the American Netflix on Android tablet:

While there are many others, Chromecast has quickly become one of the best and most popular devices when it comes to streaming.

Therefore, a huge number of people want to know:

How to set up Netflix on the Android Chrome cast?

Setting up Netflix on Chromecast can prove to be a bit complicated, but it’s not too difficult. Here is what you need to do:

How to FIX the Netflix Proxy Error issue?

Get ivacy VPN and fix the famous Netflix Proxy Error with ease. Ivacy VPN has dedicated servers for Netflix which eliminates any chance of detection. Other VPNs don’t offer this service and the result is a proxy error.

How To Watch American Netflix On Chromecast Outside Us with a VPN?

A VPN will be able to change your public IP address and thus, in the end, unblock any content that would otherwise be unavailable in the region you are located.

You will need to follow these steps to make Netflix work on Chromecast with the help of a VPN:

1-   Firstly, sign up with a VPN service if you haven’t already

4-   Connect to an American server

In case you are trying to use three different devices at the same time, there is a strong possibility that although two devices could work seamlessly, the third one may not.

Here is how you can solve this issue:

Signing out of Netflix:

It should enable you to sign out of the Netflix app.

These are the steps you should be following to restart your Android device:

What to do if I can’t download the Netflix app on my Android device?

If you experience difficulties in downloading the Netflix app from the official Google Play store, or for some reason cannot locate the Netflix app in the store, you can follow these steps to download Netflix:

There are two of the steps that can be taken to solve this problem:

Conduct verification into whether your device is Google Play Protect certified

It is possible that the Netflix application is missing from the Play store simply because your device is not Google Play protect certified.

Here is how you can check the status:

If you discover that your device is not certified, you should be taking the following steps for configuration:

As it so happens, some devices running older versions of Android are compatible with Netflix but cannot download the Netflix app from the Google Play Store.

Did you know about this exciting Netflix feature?

Now that all of your queries related to VPN use on Netflix are clarified and you have come to know all there is to know about unblocking Netflix on Android with a VPN, you should now know about a certain Netflix feature that can prove to be entirely beneficial for you!

Just like the other streaming apps, Netflix also enables you to download movies and TV shows on whichever device you are using, so that they can be watched in the absence of an internet connection.

However, Netflix has gone one step further and introduced a cool new feature that can make this whole experience even better.

The new feature called “Smart Downloads” enables you to set up automatic downloads without having any impact on your mobile data plan or the bandwidth you use. With the Smart Downloads feature enabled, your phone deletes the last watched episode and then replaces with the next one to make it readily available for offline viewing purposes. The download happens only when a Wi-Fi connection is detected, and it doesn’t cause the Netflix to use more of the store since it merely replaces the older content with the new one, thus not placing any extra burden on your storage space.

How does it work?

Netflix pushes a download status bar, appearing on your screen whenever a new episode is under download, and then you are notified again once the download has finished.

Is it the best option for you?

If you are running low on your storage pertaining to Netflix on Android and it is quickly becoming a problem for you, you can always turn this feature off so that you can download multiple episodes and manage these downloads manually. But there is a catch though! You will need to manually delete the episodes that you have watched after watching them.

In the end, if you want to know which VPN would work best on Android for unblocking Netflix, Ivacy comes heavily recommended, primarily because it has the simplest and most user-friendly app that works smoothly on Android. Secondly, Ivacy has a decent number of servers available. You need more servers for Netflix streaming as mentioned above. Along with that, Ivacy has the split tunneling option which lets you prioritize which apps you want to run with Ivacy and which ones you would rather run on your original IP address.

Ivacy fits through nearly all of the criteria there is against which we can gauge a certain VPN. Moreover, Ivacy comes with reasonable enough packages to fit everyone’s budgets. Apart from that, there is a 30-day money back guarantee so that you can receive a full refund if you are not satisfied. There is even a 7-day trial period in which you can try and test the service for absolutely no cost at all. These features make Ivacy a very reasonable option for the low-end users willing to go for an affordable enough option and unblock Netflix.

We hope that this article sufficiently addresses all of your concerns regarding the use of a VPN for unblocking Netflix on Android!