X
We use cookies to give you the best user experience. I agree Find out more
Home
Netflix VPN
Watch Netflix on Chromecast in simple steps – Updated 2020 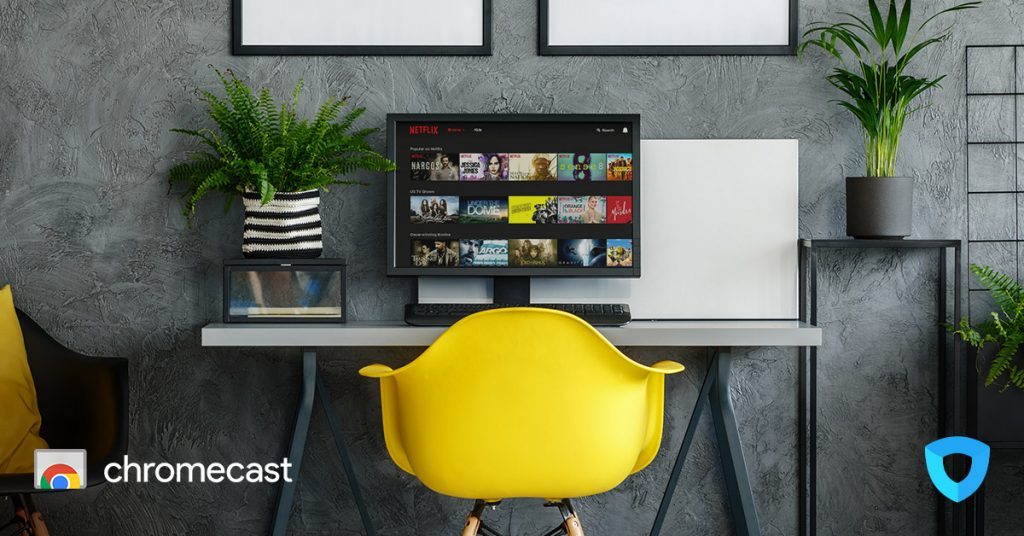 Chromecast by Google serves as a simple method to stream video directly to your TV. It operates by simply plugging into the HDMI port and is powered through a USB cable, which is provided with it. With the help of your smartphone, computer or tablet as a remote control, you can access content from a range of services such as Netflix, YouTube, Hulu, Amazon, and many others. This article focuses on how to watch Netflix on Chromecast.

A few things to consider before setting up Netflix on Chromecast?

Setting up Netflix on Chromecast is relatively easy. You will need to have your TV turned on and have the correct input setting for the relevant port in which your Chromecast has been plugged into; be it HDMI1 or HDMI2.

The device you wish to cast from must also be connected to the same network to which Chromecast is connected.

However, if you are unable to get a cast icon, reboot your device or update the app which you are using. Some users have experienced instances where the icon had disappeared until the user updated the phone or app that was being used. This constitutes a few basic things that you must ensure and keep in check before proceeding to set up Chromecast.

How to setup and install Netflix on Chromecast:

No matter which version of Google Chromecast you have, setting up Netflix on it is simple and does not take up much time.

Follow these steps to set up Netflix on Chromecast:

Once you have connected your Netflix to your Chromecast, you will see that the cast icon will have become blue indicating an active connection and your computer or mobile will begin acting as a remote for Netflix on your TV. You will now be able to play and skip or choose any new content from the Netflix app, and your TV will be responding to it similarly, while giving you access to all of the options you need while having a bigger, sharing the friendly screen.

Unblocking US Netflix On Chromecast via VPN!

As we all know, various streaming services such as Netflix, Hulu, and Amazon, etc., place geographical restrictions on certain content which means you cannot access a whole load of content if you don’t happen to be located inside the USA.

However, a Virtual Private Network or otherwise popularly known as VPN enables you to disguise your public IP address and thus unblock content that may be otherwise unavailable in your region. Thus, if you have set up a VPN, you could be able to watch US Netflix on Chromecast on a location outside of the USA.

You can follow these steps to get the American version of Netflix on Chromecast outside of the USA:

Watching Netflix on Chromecast through an iPhone!

If you are like most streaming fans, you would love sitting on your bed and pulling up Netflix on your iPhone, discovering something new and exciting to watch and then playing it on the bigger screen.

In case you do not already have the app, you can open up the app store and search for the keyword: “Netflix.” Now, download and install the app, sign in with your provided credentials, and choose any available show to begin streaming.

Cast Netflix on Chromecast on an iPhone:

Here is how you can unblock Netflix on Chromecast on an iPhone with the help of a VPN:

To watch Chromecast Netflix through Windows on your laptop, you will need to have Netflix Google Chrome installed so that you can cast Netflix on your TV. Chrome has an exclusive “cast” feature by default, which allows you to cast whatever content you are viewing in a tab to your Chromecast, including, of course, Netflix!

All you need to do for this is log in to Netflix, select a show or movie and then choose the “cast” tab located in Chrome. You can press F11 or click the “fullscreen” button to view the video on your TV in full size.

You have the option of controlling the video playback from your laptop just as you would in normal circumstances, make sure that you don’t close the lid.

Unblocking Chromecast Netflix on Windows with a VPN!

FAQs: To watch Netflix on Chromecast

Here are some of the most common issues people incur and some solutions to troubleshoot those issues:

Why am I unable to see the Chromecast icon on Netflix?

If the cast icon is not visible in your Netflix app or your web browser, ensure the following:

Why doesn’t my Netflix connect to my Chromecast?

If the cast icon is visible to you, but you are experiencing inconvenience in getting the Netflix app to connect with Chromecast, reboot both your mobile device and Chromecast.

Why doesn’t my Chromecast turn off?

Google Chromecast goes into standby mode by default whenever you turn your TV off or switch the HDMI input. However, to turn it off completely, you will need to unplug its cable completely.

How can I switch my Netflix back to the device?

If you want to stop streaming Netflix on your TV and go back to your devices’ screen, tap the cast icon and then select your device from the appearing list.

Can Chromecast be used on multiple TVs?

You can quite easily move the Chromecast dongle between different TVs so long as they have a free HDMI port that you can use to plug it in. So long as you have connected the Chromecast to the same Wi-Fi, you wouldn’t have to follow through the set-up process either.

Can Netflix on Chromecast be accessed while traveling?

You can take Google Chromecast with you while traveling and watch Netflix so long as the service is available in the country that you have traveled to. However, you may encounter a few issues whenever you are trying to stream Netflix to Chromecast, in a hotel since many of such establishments have their Wi-Fi configured such that, those settings prevent Chromecast from working seamlessly.

Why is Netflix encountering problems when connecting to Chromecast?

Here are a few things that you can take care of, to troubleshoot Chromecast connection problems:

If your modem is not set to multicast already, look for a manual or the manufacturer’s instructions on how to enable multicast

Can Chromecast be controlled with voice?

Before you needed to route your Chromecast commands via the Google home device, however now you can easily give your vocal commands, by using the Google Assistant directly. Google contains complete setup instructions towards this end. However, the functionality of this feature is self-explanatory. All you need to do to make this happen is to connect your Chromecast and your phone to a similar network. Thus, you can cast music and videos on your TV, by simply uttering a few words.

Can traveling be done with Chromecast?

Given its extraordinarily small size and incredibly easy setup, Chromecast can prove to be a really handy companion for people who travel frequently. But, there is a catch! You should know that Chromecast does not offer support for such networks that require browser-based logins. Thus, Chromecast doesn’t prove to be of much use when you are staying in hotels or similar establishments. However, if you do need to take Chromecast along with you, do make sure that you come across a Wi-Fi network that doesn’t contain a captive portal.

What are the alternatives to Chromecast?

There are a few alternatives to Chromecast, depending upon how much you intend on spending on it. For $30, Roku Express allows you to stream all kinds of content on your TV, for instance, content from services such as Amazon video. An Apple TV, on the other hand, costs $150 and functions similarly to Chromecast, except it also can stream different content such as games from your iPhone or iPad onto your TV. On the other hand, you can also stream content from a PS4 or Xbox, but that could cost you much more!

How does the Chromecast Audio work?

Quite similar to its video-based counterpart, the Chromecast Audio plugs in the speakers to stream music through the Wi-Fi network. It costs around $35 and works with Spotify, Pandora as well as Google Play and iTunes.

When all is said and done, you will need a reliable VPN to unblock and stream Netflix on Chromecast. Ivacy VPN is one of the leading VPNs of the world and hailed as the fastest of them all.