X
We use cookies to give you the best user experience. I agree Find out more
Home
Netflix VPN
Series Cravings
How to get Netflix on Apple TV including Apple TV 1 – Updated 2020 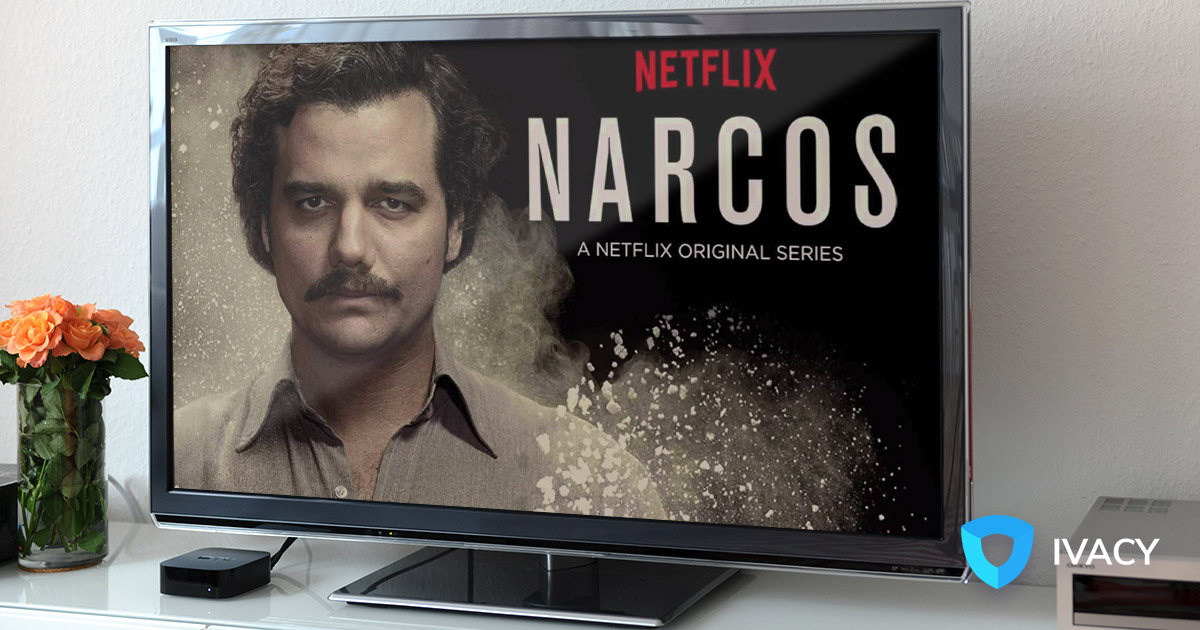 Since Apple and Netflix are two of the world’s biggest players when it comes to entertainment, it is understandable that both of them have long partnered to make it possible for users to watch Netflix on apple tv and access the huge catalog of premium TV shows and movies on the Apple TV Netflix. It’s just much more simple and easy that way!

Moreover, since Apple TV 4K was released, it is now possible to watch Netflix’s ever-expanding library of HD content in the highest resolution existing. However, you do need to sign up for the premium Netflix plan, since 4K streaming is a luxury available only to those agreeing to pay the top dollar for it!

“The winner of Best VPN awards for 2019 – you can use the best VPN to access Netflix for Apple TV with a very small dent in your pocket.”

Is it possible for me to watch Netflix on Apple TV?

It’s entirely possible for users to watch Netflix on Apple TV, provided that they have a subscription for it. One of the many built-in apps for Apple continues to be Netflix, which means you can access it directly. However, if you are not a Netflix fan and rather opt for the other streaming services, you are in for a bummer! Many of the other popular services such as Amazon Prime, Hulu, and Crackle do not happen to have native apps on Apple TV.

However, the 3rd generation and the models introduced after that all support 1080 HD and the 4th generation – the latest model also known as Apple TV 4K; goes on to further support up to 2160p. Although, simply having Apple TVs’ latest version is not enough if you want your experience to watch Netflix on Apple TV to be a good one! You will need to have a fast enough internet to keep up with the ultra HD resolutions unless you are okay with extreme buffering.

Here is How to Watch Netflix on Apple TV 2 or Apple TV 3!

If you want to set up your Netflix Account on Apple TV, you will need to ensure that you are on the Home screen when you start and then follow these steps:

Just in case you have not been able to keep up with the changing times:

Here is how you can Watch Netflix on Apple TV 1:

The only feasible way in which you can watch Netflix on Apple TV if you are still stuck with the first generation is, by converting Netflix TV App to the Apple-supported formats. This can be done via the Wondershare converter.

How to merge your Apple TV to your Netflix Account

And that’s just about it! You are now all set to watch Netflix on Apple TV!

You are now in! Enjoy the Netflix experience on Apple TV!

In which regions can users watch Netflix on Apple TV?

Ever since Netflix launched and started offering to stream, it has proved itself to be one of the foremost streaming services in the world through its diverse portfolio of movies and TV shows coupled with its quality service. However, if there is one problem that every other Netflix user could be found complaining about is the geographical restrictions imposed by the Netflix content providers.

You can only watch Netflix on Apple TV in regions where Netflix has made itself available. But there are the way by which you can stream American Netflix in the UK or any other region.

Currently, there are only a few countries on the world map where Netflix is not available, with the service streaming in over 190 countries, however, you can unblock Netflix with a Netflix VPN.

With a VPN you can access all your favorite content anywhere in the world and you don’t have to worry about the famous Netflix Proxy Error which often comes with the free VPN service.

What about the Apple TV Netflix Subtitles and Alternate Audio?

To enable/disable subtitles or configuring the alternate audio on Apple TV 2 and 3 follow these steps:

Although it rarely happens, if you are facing difficulties in accessing Netflix on Apple TV, you can do the following:

Installing a VPN on Apple TV:

Now, comes the most important part and the one thing that makes all the difference between you and limitless Netflix entertainment on Apple TV – a reliable VPN!

You must have a VPN installed on Apple TV to enjoy Netflix.

Here is why you need a VPN on Apple TV:

You need a VPN to watch Netflix on Apple TV primarily because without it you won’t be able to unblock the geographically restricted Netflix content. Therefore, it is imperative for you to select the best VPN – fast, compatible with Netflix, economical, and one with a long list of servers. There is a long list of options that you can choose from, however, Ivacy has all the necessary features down to a T and happens to be the winner of Best VPN awards 2019 too!

How to Configure VPN on Apple TV: (DNS method)

So, here is how you can set up Ivacy VPN on your Apple TV:

How to watch Netflix on Apple TV outside USA for American Shows?

1- First off, you will need to sign up with Ivacy VPN
2- Now, download the Ivacy app from the app store on your iOS device
3- Launch the application and sign-in with the credentials you have received via email.
4- Select a US-based server from the list providedNow, launch the Netflix app
5- You can now watch American Netflix on Apple TV!

Here is how you can set up a DNS on Apple TV 4:

1- Go to Settings on the Apple main menu
2- Select Network
3- Select Wi-Fi and pick the Wi-FI network you are currently using
4- Scroll and select “Configure DNS”
5- A prompt will pop up, asking you to choose between “Automatic” and “Manual”, choose “Manual”
6- Enter your DNS address, which you can get by signing up for a DNS service.
7- Change your device region by going to “Settings” and choosing “General”
8- Chose “Region Format” and select “United States”
9- Chose “Sleep Now” from the “Settings” menu

How to Uninstall Apple TV Netflix?

The Uninstalling App option is available only on the Apple TV 4th generation. If you have the 2nd or 3rd generation, you can only hide those apps. However, this function works the same on all versions.

All you need to do is, tap the Netflix app and hold it down until the app starts shaking. The Play/Pause option will appear, after which you can choose to delete or Hide it.

Can I watch Netflix on regular TV?

You can easily watch Netflix on regular TV, provided that the TV is a Smart TV and not an ordinary one.

What other devices can I watch Netflix on other than Apple TV?

Netflix works on pretty much all platforms along with Apple TV including the following:

Why does Netflix buffer so much on Apple TV?

In an attempt to match the ideally required internet speed, Netflix starts buffering in order to maintain the visual quality that has been selected by your end. The solution is to hit ctrl-shift-S, to make Netflix’s hidden streaming menu appear and then change the resolution settings.

How do I reset and watch Netflix on Apple TV?

Why does Netflix give the “Currently Not Available” message?

When you receive this message, it shows that your Netflix app needs an update or presents a network related issue that is hindering your Apple TV device from connecting with the Netflix service. However, this can be easily solved by following the troubleshooting steps given by Apple TV.

Will Apple TV be able to work on any TV?

No, Apple TV does not work on any TV. Your TV needs to be HDTV with at least 720p resolution. Moreover, the 4th generation would require a 4K Ultra HD TV.

Only the latest version of Apple TV i.e. the 4th generation supports 4K while none of the previous versions go beyond 1080p.

How to quickly fix Delays?

As has been reported by many users over time, sometimes the Netflix app stops all of a sudden and does not move forward. In such an instance, you can click on the Apple TV remote, double tap home button to access the App Switcher, now swipe on the touchpad to quit the app.

If in case you come across error code 11800, it means that the system information of your Apple TV needs to be updated. All you need to do in that case is, turn off Apple TV, unplug the cable and then insert it again, thereby restarting your Apple TV again.

How to Enable the 4K streaming option?

If you happen to be using Apple TV in 4K, you may want to see Netflix’s shows in the best possible 4K resolution. You can ensure that you are always getting the optimum 4K resolution by opening Netflix’s account settings page on your device and visiting the Playback settings.

You will need to switch to the high option but you will need to keep in mind that, you can achieve 4K quality with a 30 MB/second connection or more.

Signing out of Netflix is as easy as signing in to any other service out there. Swipe to the left so that the sidebar appears, then select settings and tap the Signout option.

What to do if I am unable to connect to Netflix?

In case you run into trouble whilst connecting your Apple TV with Netflix, you can try the following steps:

How to connect Apple TV?

The following three are pre-requisites when it comes to connecting Apple TV:

Now, once you have ensured that these requirements have been met, all you need to do is connect the wires from your Apple TV to the TV. You may have to also invest in an HDMI cable if it didn’t come with Apple TV. Finally, you will have to use the “Source” option as per your TV remote and navigate to the options on your Apple TV through the input source.

Can I change my Netflix membership?

Why don’t I hear any sounds when I try to watch Netflix on Apple TV?

The prime reason that this problem is caused is due to the content you may be trying to access or connection problems pertaining to your speakers. You must switch on to another show but if the problem persists, check the audio settings.

Why can’t I see Netflix app on my Apple TV?

Sometimes the Apple TV’s operating system hides or moves some apps to another place than their original and the same can happen with Netflix too. Apple TV’s troubleshooting can be used for solving this issue. This can also be a signal that the software needs updating.

If your Netflix app keeps crashing, you can solve this problem by unplugging all wires for at least 40 seconds and later on resetting the Apple TV settings.