Here is an insight into the exciting content that’s scheduled to premiere on Netflix throughout January 2022. We present you the list of Netflix Originals and non-Netflix Original titles scheduled for release in the United States throughout the first month of the year.

A generally unhappy Mike isn’t at all happy with how his life turned out and wishes it was different. One day he wakes up to discover that his wish has been granted.

An ordinary pizza delivery boy must enlist the help of his former best friend after two wannabe criminals kidnap and force him to rob a bank with a time bomb strapped to his chest.

A thief hides a diamond at the police headquarters and disguises as a detective to retrieve it. He eventually gets paired with a real policeman to investigate burglaries.

Notorious con artist Frank Abagnale has duped people worth millions of dollars with his masterful art of deception. With his scams getting bolder, he is soon pursued by FBI agent Carl Hanratty.

Two high school boys want to enjoy their lives to the fullest before they go to different colleges. Unfortunately, their debauchery lands them in trouble.

Based on a true story, Christopher McCandless – a young graduate, decides to abandon all his possessions and hitchhike across America and encounters wilderness in a way like never before.

Young Henry Hill, with his friends Jimmy and Tommy, begins the climb from being a petty criminal to a gangster on the mean streets of New York.

An undercover agent and a spy constantly try to counter-attack each other in order to save themselves from being exposed in front of the authorities. Meanwhile, both try to infiltrate an Irish gang.

In the near future, a drone pilot sent into a war zone finds himself paired up with a top-secret android officer on a mission to stop a nuclear attack.

Four days after his car accident, Martin, a biochemist, wakes up to realize his identity has been stolen. Perplexed and suffering from memory gaps, he sets out to unravel the mystery behind the theft.

After failing a mission, a DEA agent decides to go to a small town with his nine-year-old daughter to live a peaceful life. However, things do not go as planned when he crosses paths with a drug lord.

An excavator and his team discover a wooden ship from the Dark Ages while digging up a burial ground on a woman’s estate and all hell breaks loose. The Dig is expected to appeal to the horror movie enthusiasts with Netflix subscriptions.

We have covered the major movies and TV shows that will be up for streaming in January. If we missed something or you would like to make a recommendation, do let us know in the comment section below. 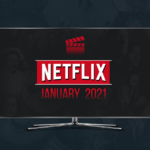