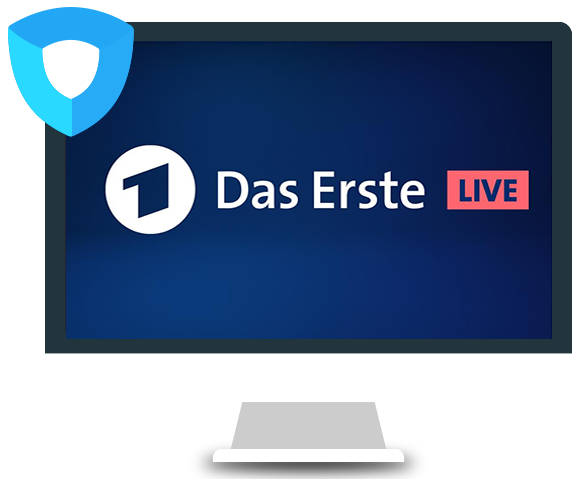 Here's How To Watch ARD Livestream Outside Germany

Open the Ivacy app and connect to a Germany server.

Watch ARD Livestream online from anywhere in the world.

The people within Germany face no issues accessing ARD, all they need to do is access the website and look for the content and it opens immediately. However, German ex-pats and those outside of Germany cannot access ARD Livestream USA due to geographic restrictions. This blocking is activated when Das Erste’s systems recognize the connection as a foreign one, and this is done by identification of a user’s IP address. Because of this, when you try to access ARD Livestream, you get the following error:

“Dieses Video kann leider nicht abgespielt werden. Wichtig: Inhalte mit Geoblocking können nur von Deutschland aus abgerufen werden. Wir bitten um Ihr Verständnis.” This roughly translates to: “Sorry, this video is not available for playing because geoblocked content can only be accessed from Germany. We are sorry for the inconvenience and request you to understand”

These restrictions exist because the system identifies the connection request to be coming from outside of Germany considering the IP address of the user.

How can such restrictions be circumvented?

All you need is a good VPN to watch LiveStream ARD from anywhere across the world and Ivacy is it! Before selecting a VPN you must know which VPN can get you the best possible experience and crucial aspects such as, what’s the difference between a privacy policy and encryption strength?

You must seek a Virtual private Network which can manipulate your location. The solution is to hide the non-German IP address and replace it with a German one, which can be done with the help of a VPN service. Subscribing to a VPN and setting it up is way easier than what most people have in mind. Moreover, once you have connected, streaming ARD’s content on any platform – Android, MAC, iOs, Windows is also incredibly easy.

How to Unblock ARD LiveStream USA outside Germany with a VPN?

Germans who miss their home and want to stay connected with German Shows even while staying abroad must get a German IP through VPN in the first place. This makes the channels you want to access believe that, you are connecting from Germany rather than your original location. This way, you will no longer be facing any restrictions when accessing channels, websites or services pertaining to Germany.

Here is the simple process you can follow to unblock & Watch Livestream ARD:

How do VPNs operate?

VPNs are online encryption measures with the ability to hide the user’s IP addresses along with the traffic, browsing data and other connection details.

The VPN technology uses various protocols with differing capabilities, for instance, OpenVPN, SSTP, L2TP/IPSec and PPTP to send the encrypted data to the remote servers administered by the VPN service.

Apart from the fact that a VPN can unblock ARD for you, there are several other benefits as well. Firstly, VPNs offer privacy, turning you invisible for hackers, spying government agencies, law enforcement agencies, ad spammers and your ISP. Secondly, a VPN ensures anonymity so that your IP address isn’t leaked and you can continue to browse with anonymity without fearing that you could be recognized. Moreover, your connection also becomes secure making you less vulnerable to hacking attempts, crypto mining coupled with viruses or malware.

Although it is absolutely easy to use a free VPN service to watch Livestream ARD, all the security experts warn strongly against it. Free VPNs can be found on every app store and extension site, while more often than not they do more to harm, rather than doing good.

The thing is, these no charge VPNs don’t make money from their users but rather make profits from the sale of user’s data, thereby violating the user’s privacy soon as they have logged on. Therefore, using a free VPN is a risk that you must better not take. Moreover, free VPNs also contain a lot of restrictions, for instance, bandwidth limitations, P2P blockage, smaller server selection and overall slowness. Best VPNs are only the ones providing fast and secure online experience without compromising on privacy.

Although Das Erste happens to be quite well renowned in Germany, the moment you have crossed the border for another country, the connection becomes unavailable simply because ARD doesn’t allow streaming from outside Germany. Even if you are a German but are traveling abroad, this won’t be possible for you.

However, we have taken care of that for you. When it comes to choosing a VPN for diverse needs, Ivacy VPN tops the lists. It has made its mark as a rock-solid product guaranteeing smooth user experiences. It is quite well known for bypassing the geo-restrictions and securing internet connections.

Here are some of the pertinent features offered by Ivacy – our topmost recommendation on the VPN you must go for.

Here are some of the reasons why Ivacy is the best VPN for streaming ARD:

Pretty much any device and platform you can think of, is supported by Ivacy. It offers support across a diverse range of devices that you can run it on, easily.

Ivacy has downloads at super speeds and also happens to be the winner of BestVPN’s fastest VPN award, which can be particularly beneficial when you are streaming content on ARD. You can be sure of the fastest possible speeds with Ivacy no matter which part of the world you are connecting from, these speeds are pretty much unmatchable and most other VPNs do not offer the same speeds.

The higher the number of servers that a VPN runs, the more options you have for streaming ARD. Ivacy has 1000+ servers based in 100+ locations around the world each featuring the fastest and most secure servers in Germany and around the world, delivering the optimum streaming speeds as well as top notch privacy!

Ivacy’s server network not only spans around the globe but is also near perfect for ARD live streaming. Numerous unique locations within Germany provide all of Ivacy’s awesome features, providing all the tools you may need for attaining a fast or secure video experience.

Ivacy’s Split Tunneling can be pretty useful since it enables you to run ARD Livestream on the VPN while use your original IP address for the other apps.

Ivacy’s privacy features work 24/7 to ensure user’s safety online since data is protected with the 256- bit encryption otherwise also known as the military grade encryption and is well backed by the strict No logs policy or the zero logs policy pertaining to traffic, DNS requests and the IP addresses. Meanwhile the DNS leak protection and the easy to incorporate automatic kill switch also prove to be fail safe’s in the event of an accidental disconnection or other technical issues.

Ivacy has a very well deserved recognition for being one of the fastest and most secure and ensuring these features without jeopardizing the usability since it’s apps happen to be incredibly lightweight and easy to use. Ivacy runs a massive network with each of it’s servers delivering fast connection speeds, allowing you to connect with simply one touch, resulting in great HD video streams. Thus, you can easily watch ARD from any device without having to look at buffer screens for minutes and minutes.

In case you are running into trouble with respect to setup or access of content that you want, the support is incredibly easy to get with swift response times. It offers 24/7 live chats and you can also submit tickets for a particular problem if that is what you want!

Ivacy VPN tops all lists of best VPNs since it is a stellar choice for unblocking ARD Livestream with its top-notch performance and servers optimized for speed. Moreover, it is also well known for unblocking other popular streaming services such as Netflix, Amazon, Hulu and more.

Ivacy’s app settings are clear, concise and incredibly easy to modify. Its desktop app is as simple as a VPN’s can be. You just simply click connect to have it run. Ivacy’s apps have auto location selection, interactive designs, and detailed settings panel. During the course of our testing, we discovered that, each app was easy to set up and connect with full functionality across all devices and platforms.

Ivacy app’s default settings can prove to be particularly beneficial for those who desire to stick to a VPN’s basics and do not have further knowledge of VPNs. They can just rely on hitting the connect button and opting not to explore the settings further than they need to. Ivacy’s desktop app by default connects you to a secure OpenVPN connection with 256- bit encryption while the mobile app can be switched to OpenVPN as well.

ISPs throttling interent speeds is a common phenomenon and something every user can be found complaining about. However, Ivacy ensures a complete anti-throttling experience which is why your connection is able to maintain optimum speeds at all times without going through the frustration that results in an event of throttling.

Ivacy has an acknowledged privacy and no logging policy meaning they don’t log your data in any case. It is incorporated in HongKong and the very fact that it is based outside of the Europe and US region, makes its No logs claims authentic. It’s because with VPNs based outside of US, enforcement becomes complicated. Therefore, such cyber laws may not apply on Ivacy as compared to the VPNs based and operating out of Europe or USA. This makes the reach of the government surveillance useless, turning Ivacy into a completely privacy focused VPN, rather than some service operated out of the largest surveillance/police state of the world.

How to Select the Best VPN for Livestream ARD Online?

If you do not wish to take our recommendation for the best VPN for ARD Livestream and would rather carry out research on your own, to see what works best for you, here is some criteria into what makes a VPN best. You can use these criteria against which to gauge other VPN services.

This is particularly important since, when it comes to VPNs many VPN providers appear to and claim to be offering the same service but they definitely do not stand on the same footing. When streaming content, you need a fast and reliable VPN service that keeps your privacy and security in the first priority while also offering actionable customer support.

Selecting a VPN is a risky business because if you don’t choose wisely you risk being incriminated by DMCA notices and all hell can break loose if that happens.