LCI shows are available on their website through live streaming too but the access to the website is limited to a few countries. If you wish to watch LCI live online outside of France, use Ivacy VPN. 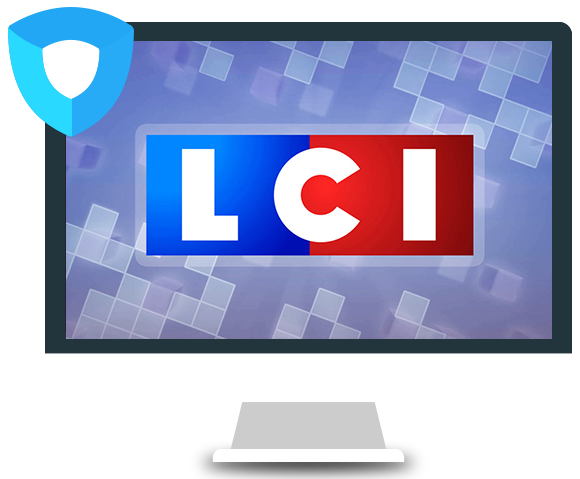 Here's are the three simple steps to watch LCI Live online outside of France or from anywhere in the world:

Watch LCI Live online from anywhere in the world.

La Chaine Info or LCI as it is more commonly known is a free-to-air channel native to France. A free-to-air channel is anyone which is distributed freely across a specific region. With the right equipment and knowledge of the frequencies, any broadcaster can tune in and begin transmitting content from the channel without any licensing or subscription charges, etc.

Launched in 1994, La Chaine Info translates to ‘The News Channel’ in French. LCI live online is a primary news channel which airs content without charging any overhead fees for its broadcasts. This was initially not the case as the channel began as a pay channel which used to charge service providers if they wanted to air transmission from it.

LCI online is owned and controlled by TF1 Group which is headquartered in Paris. LCI’s mother channel has a market share of 24% which is by far the most held by any other domestic network. LCI has a low market share but it is still among some of the most frequently viewed channels in the country. The slogan for the channel is “You are at the heart of the news”.

LCI live online is a channel which airs news programs only. There are several shows which air throughout the day and each of them covers a different aspect of the news. They are presented by some of the top journalists and industry experts making the insights credible and exciting. The first broadcast of the channel was aired at 8:30 AM and would run for a limited time. Now though, there are several programs throughout the day. Some of the most noteworthy include:

The channel and the schedule of its news programs have been formulated in a way that it offers comprehensive news coverage to users across the country and anywhere else in the world where people may be watching LCI live online.

Keeping in accordance with changing customer preferences, LCI has made itself available on almost every major platform available. The website of the channel is full of news from around the world. All aspects like technology, weather, and sports, etc. are available. Users can watch LCI live online or go through the info feed which lists every major happening across the world.

The mobile applications for LCI live online are available for both Android and iOS. These have been specifically designed to cater to smartphone users and provide extensive functionality. The channel is also available on major social media platforms. Users can follow their respective handles on Facebook, Twitter and LinkedIn in order to stay updated from LCI live online.

Can LCI detect a VPN?

The LCI live online channel’s website, like many other servers, can tell when a VPN is being used because of the same IP address that the program assigns to users logging in from the same server. However, the possibility for this, especially with a channel like LCI, are slim. Moreover, the website also can’t tell the exact location of any user no matter how many times they sign in. The similar IP addresses are also ignored because the website assumes that the same user is logging in multiple times. So even though it can tell that a VPN is being used, there is no action taken against it.

LCI is a great place to go if you are looking for an elaborate dosage of daily news. Watching LCI online does pose certain threats like privacy issues and geo-restrictions. It is for these times that you need a VPN like Ivacy. With its strict zero-logging policy, the service offers security and privacy. There are no restrictions on speed or bandwidth so that you enjoy the best experience while streaming LCI online.