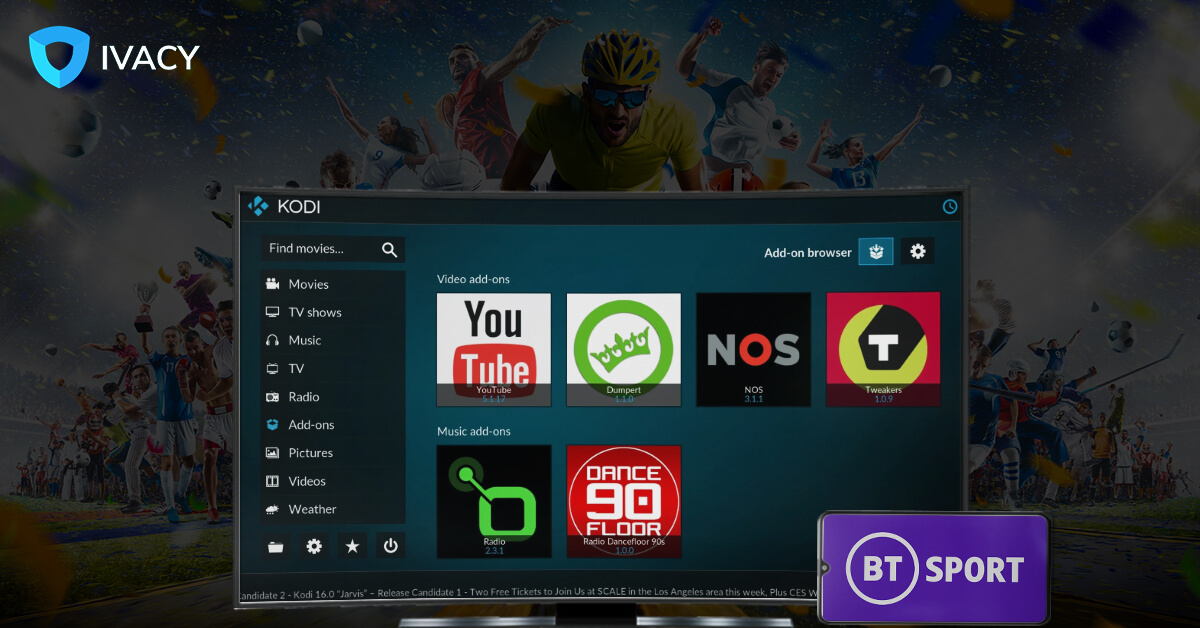 Looking for free, grounded, and well-rounded entertainment? Try Kodi, a one-stop media player for entertainment enthusiasts world-over. The hub of TV shows, movies, songs, and sports, there is very little that you can’t do with this beast of a media kit. And here’s the thing, even though movies and shows are fun to watch on a night-in, the adrenaline rush of a game well played is something else. While movies and shows can be watched any time, sports are best enjoyed the first time they are played; right when their audience can watch BT sports Live Stream from anywhere that take their shots live and cheer on their favorite teams.

As a brilliant platform for sports fans, Kodi lets you watch BT Sport live stream and get your fill for the top sports teams including the English Premier League, UFC, UEFA Champions League, and UEFA Europa League to name a handful.

How to Watch BT Sport Live Stream on Kodi

Kodi makes it super easy for sports fans to get their craving for good games fulfilled. All you need to do is to download Kodi on your device, install the addon, and you’re good to watch BT Sport Online free! Although you do need to keep in mind that the official BT Sport live stream Kodi addon is geo-blocked in several regions of the world, so for that to work, you’ll need to be at one of the locations where it is accessible.

But in case you’re not, we’ve got your backs covered too!

But that’s not all, there’s another way to watch BT Sport live. By getting UK Turks on Kodi you can access BT Sport live stream from any corner of the world. In many corners of the world, this is also considered to be the best Kodi addon for BT Sport.

Currently, UK Turk Playlists is the best Kodi addon to watch BT Sport on the open-source media platform. You will be able to install it on your Kodi after which, you can live stream your favorite sports including UFC 229 on Kodi. Below you will find the installation guide to set up BT Sport on your Kodi version, respectively:

Streaming Kodi for BT Sport without a VPN may just get you a DMCA Notice! Protect yourself, and stream BT Sport Kodi with the best Kodi VPN!

How to Watch UFC via BT Sport Live Stream on Kodi

UFC is a widely popular sport that is enjoyed by people from every walk of life. The electricity a UFC event packs is one to marvel at!

With BT Sport, which happens to be the official broadcast partner for UFC in the UK, you can watch the event live. So even if you are based in the US region, you can UFC with ease.

In case if you are located outside of the US or UK, you can employ Ivacy VPN to avail BT Sport channels and thus, access MMA live from anywhere in the world.

On Kodi, however, here’s how you can enjoy UFC.

How To Install UK Turk Playlists Kodi Addon For Jarvis 16.1

Worried about getting a DMCA notice while streaming Kodi for BT Sport? Protect yourself with Ivacy VPN as you Watch BT Sport live stream.

How To Install UK Turk Playlists Kodi Addon For Krypton 17.6

Now you know how to watch BT Sport on Kodi. To make sure you’re not getting bottlenecked by geo-blocking or legal issues, subscribe to an Ivacy account.

Alternatives to BT Sport on Kodi

Even though we get if you’d want to limit yourself to BT Sport live stream, however, if you want to explore further waters, Kodi has several sports addons available besides BT sport live stream. Here are some of our favorite options that can also be unblocked anywhere in the world using Ivacy.

ESPN, Inc. is a pioneer among basic cable television networks in that it devotes its entire programming to a single topic: sports. By 2002, ESPN’s main network had reached over 87 million homes and aired all four major professional leagues: baseball, football, hockey, and basketball. ESPN was the number one basic cable network in terms of affiliate, national, and local advertising income, according to ESPN’s parent company, Walt Disney, in its 2002 annual report. ESPN, widely regarded as the most successful basic cable network, provided marketers with access to a difficult-to-reach population of young guys. ESPN was routinely chosen as the most valuable cable network by cable system operators.

NBA League Pass is an out-of-market sports package that is offered as an online streaming subscription as well as a cable and satellite TV add-on. The service is the premier location for NBA programming, including on-demand access to about 40 live games each week and full-game replays.

The iPlayer is a web service that allows internet users in the United Kingdom to download and watch BBC television and radio shows for up to seven days after they have aired. Users can download and watch programs as soon as they are broadcast on BBC TV or radio.

Fox Sports Go is a smartphone app that allows Dutch fans to follow their favorite sports wherever they go. The app has offered mobile coverage for all of Fox Sports’ broadcasting rights over the years.

The USTVnow website converts a computer, smartphone, tablet, or Smart TV device into an interactive TV screen, allowing users to watch TV not just in different areas of the house, but also empowering travelers and expatriates to watch TV when traveling or staying abroad.

Using a VPN is legal in most countries in the world. However, there are still a few countries where using VPN services is illegal. This is often because of security and privacy concerns. Thus, the local government bans some specific VPN services or the use of VPN services entirely.

To be on the safe side, we suggest that you contact a legal professional and ask them about the legal status of using a VPN in your country. And only if they give you the green light should you proceed to subscribe to a VPN service.

Can I use a Free VPN?

Yes, you can use a free VPN, but we would recommend that you avoid them. This is because free VPNs often make up for the revenue lost by selling off personal user information to third parties. Thus, opening you up to the risk of cybercrime.

In contrast, paid VPN plans are much safer to subscribe to. Since they are charging you a monthly subscription, they would not risk losing you as a customer. Furthermore, paid VPN services usually follow strict no-logs policies that ensure that your personal data is not leaked anywhere.

As per the new US bill, your ISP can sell off your browsing history let alone spy on your online maneuver. To keep away from getting caught while streaming on Kodi, it is highly recommended you use a Kodi VPN to encrypt your traffic and hide your IP address.

Yes, BT Sport is now also available for download on the Amazon Firestick.

Yes, you can also watch BT Sport on a web browser. You will just need to visit the BT Sport official website and stream the content on their online video player.

BT Sport might not be working with a VPN if your IP is blacklisted. IPs usually get blacklisted when there is an unusual amount of traffic on a single IP address. For this, you ought to try switching the server that you are connected to.

Tags : bt sport on kodifeaturedwatch bt sport live stream
previous article
How to Watch T20 Cricket World Cup 2022 in Australia
next article
All About 2022 ICC Men’s T20 World Cup
you might also like